THE MANY LIVES OF BOGDAN KONOPKA
In the city of Wrocław, in Poland, where Bogdan Konopka (1953-2019) was born, you cannot escape History. Seventy percent of the city was destroyed, a city which at first belonged to the kingdom of Poland, before becoming a part of the Duchy of Silesia, then of Bohemia. It was under Habsburg administration then became Prussian and then Polish once again.
As a child, from the window of of his apartment, Konopka saw the Nazi architecture of the Gestapo’s erstwhile headquarters that had become the seat of the Communist Party. On his way to school, he would brush against the Prussian walls. Even then he felt ‘the weight of History, written by the alliances of which he is a victim, not a citizen’.
Later on, he would be saddened to see that his native country was ‘an immeasurable charnel house, its lands a vast burial mound, fertilised by the blood and bodies of warriors, soldiers and innocent victims’.
Bogdan Konopka has lived several lives: a student in photo-chemistry, director of the photo lab at a polytechnic, lock keeper on the Oder canal, member of an underground conceptual movement… He also joined Solidarity against Poland’s authoritarian communism, which he fought through performances. He describes the tanks in the streets, the curfews, his own arrest and internment in the army as a ‘purge to digest reality’.
In 1988, he fell in love with Jacqueline and followed her to France where they settled down, first in Angers, then in Paris, which welcomed him to the Cité Internationale des Arts, on the banks of the Seine, and later on Montmartre, before eventually affording him an artist’s studio in Montparnasse. Before being championed by Françoise Morin, at Douches la Galerie, his work was shown and supported by Françoise Paviot for twenty-five years.

SMALL CONTACT PRINTS TO SAVOUR UP CLOSE.
Never far from his home country where he taught, exhibited and spent several months each year, he developed a stylistic unity magnified by technical know-how in the dark room that allowed him to be completely free in his creations. Going against the grain of trends, he favoured the small black and white analogue format with velvety greys that smack of timelessness, and that can only be appreciated up close. These prints by Konopka bring to mind ‘a couple making love, because there is no air between the negative and the paper’.
He has thought and written a great deal about his passion, which is to reveal light. And in order to do that, he must tame the half-light and translate it onto a print. Isn’t darkness, which erases all contrasts, which requires the greatest subtlety between what is still discernible and what is disappearing, the inseparable companion of light?
In his search for unity between physical and mental space, water – from a mountain spring to the great blue Danube – also becomes the source of inspiration. A means, perhaps, of ‘demonstrating the illusion of ordinary visual perception, of imagining other perspectives’. Water is so exuberant, so alive that he addresses it many times, giving back to a river the shots it allowed him to make. Then, with a large format camera on the banks of a Swiss river, he produces a contact print, which makes for timeless images.
He knew it takes courage and honesty to stare truth in the face when you dive into the darkest recesses of your soul. He said, ‘Seeing more than what is on display, entering a sort of trance where your gaze pierces the surface of things, is accomplished over time, without a flash, and causes suffering’.
He knew there are ‘ways of photographing that allow one to go beyond the glance and the hunt for lightning. It’s enough, for example, to screw the camera to a tripod, to look carefully, to wait, not to give up. If there is something we identify with, or that touches or moves us in what we are looking at, we can then be certain that we have a chance to take an interesting photo’, he said.

AS THE TARKOVSKY QUARTET PLAYS
Bogdan is everywhere. In the post-Shoah void and silence, he gets lost on the barely-visible paths of his country, searching for forgotten cemeteries, Jewish graves where, despite everything, there are still tangible traces of the presence of the absent.
Another day, he’s by the Gap, on the banks of a river, another time in the old mines of the Nord Pas-de-Calais,
by his diaspora. He is in a forest, at the root of the Loire, or climbing the steps of Notre Dame. He photographs Paris, its Grand Palais, the lowered blinds of its shop windows and displays, the Grands Moulins, la Halle wheat exchange, the Centre National de la Danse de Pantin, l’Odéon, but also Pingyao, Shanghai, in China, the Beijing opera under construction. In each city he captures ‘the heritage of nothing’, landscapes elsewhere, but also humans and automobiles. He taught at the Vevey photo school, wrote for a newspaper, did editing, made a book.
In his home country nowadays he’s pictured lighted by the red light of his lab, in the process of making prints, each of which contains ‘the shadow of its creator and of his time’, in the process of experimenting, to the strains of Couperin’s Tenebrae Readings, which lasts exactly the time necessary to develop a negative.
His volumes of Cioran, Bachelard, Michaux, Bouvier, Perec, translated into Polish, wait for him on their shelves, like prints of his colleagues and friends, his guitar, pickled mushrooms brought back from the Polish forest, good Swiss tomme that Jacqueline brought back, all while the Tarkovsky Quartet plays on and on endlessly in his studio… // Magali Jauffret / Art critic 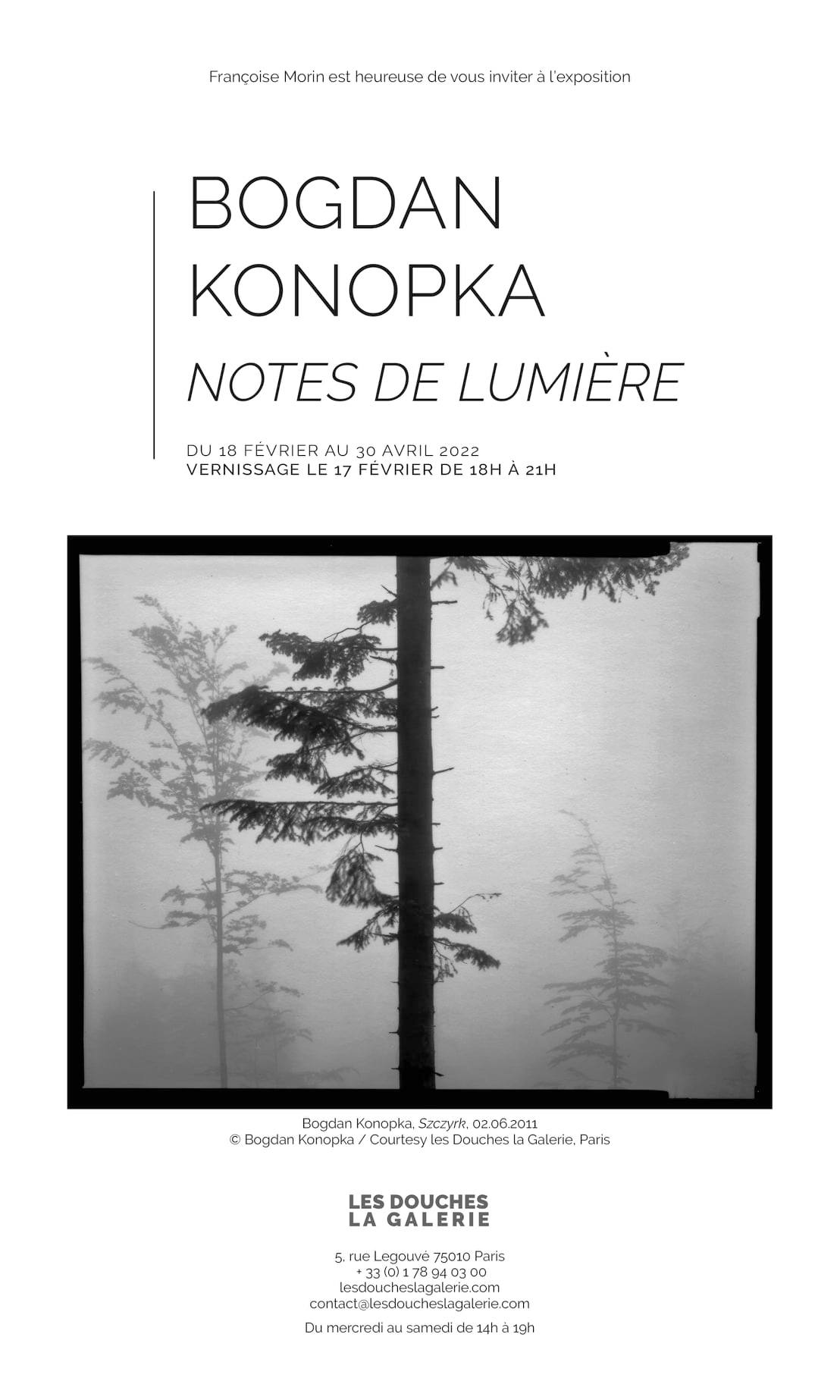 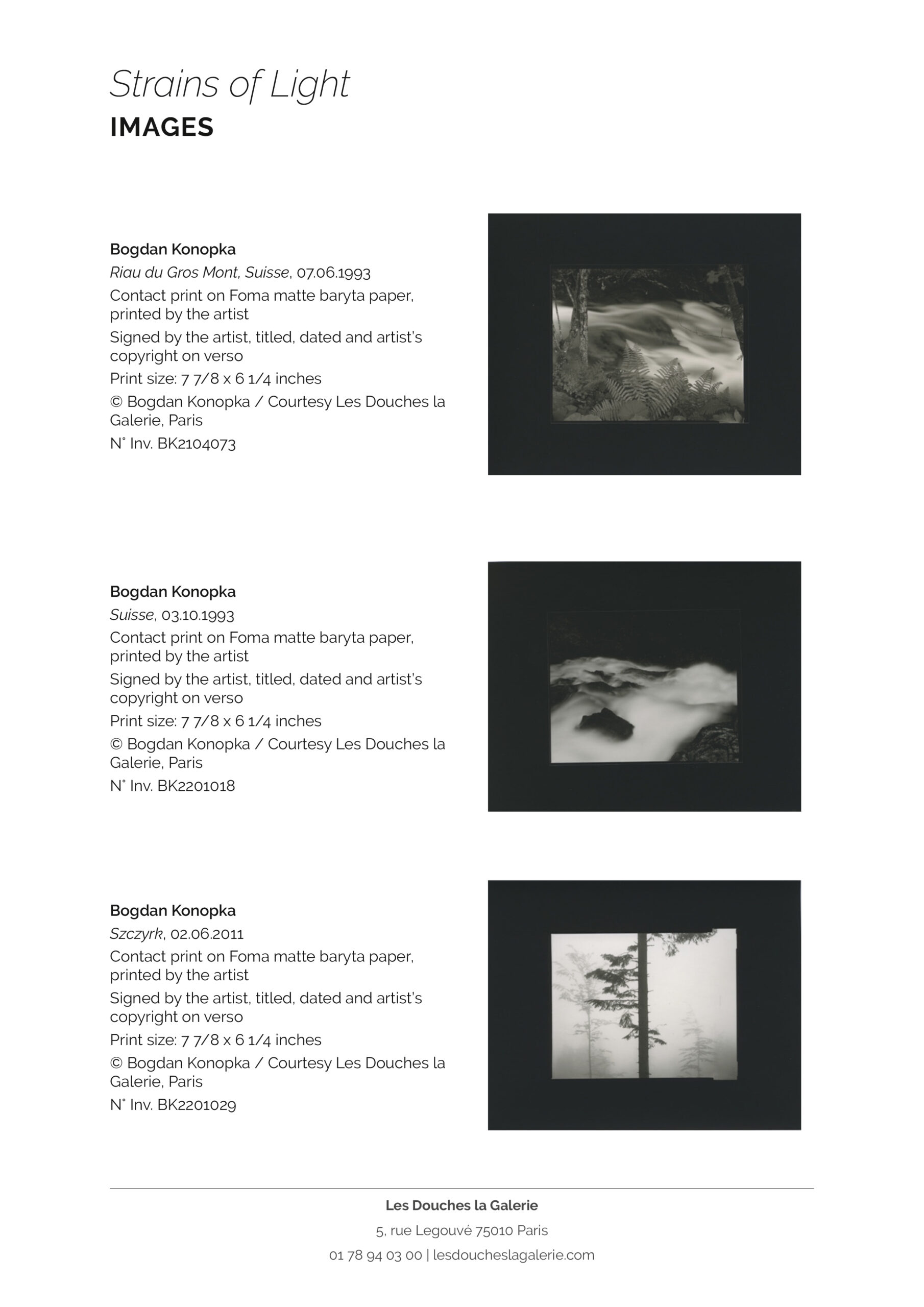 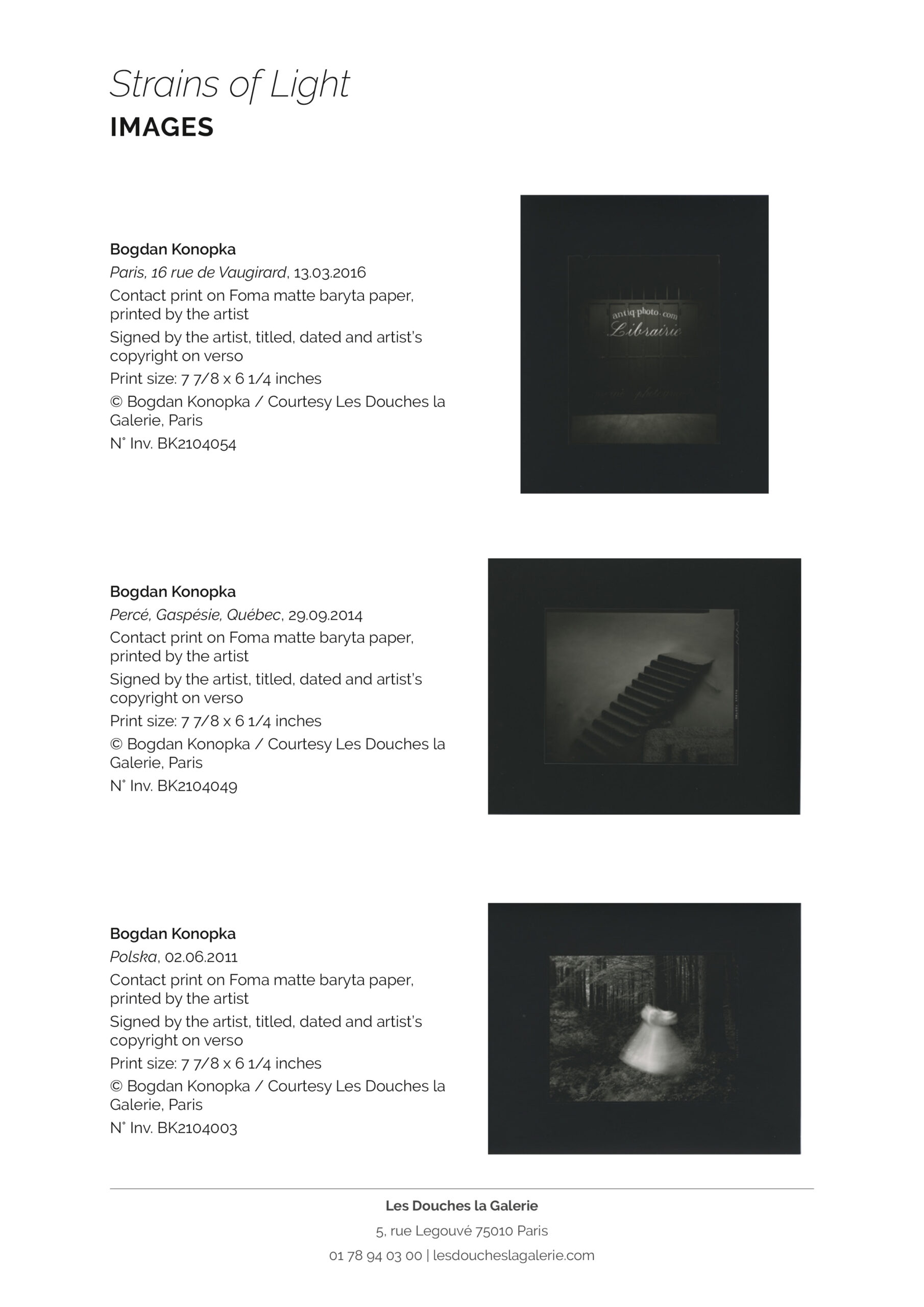 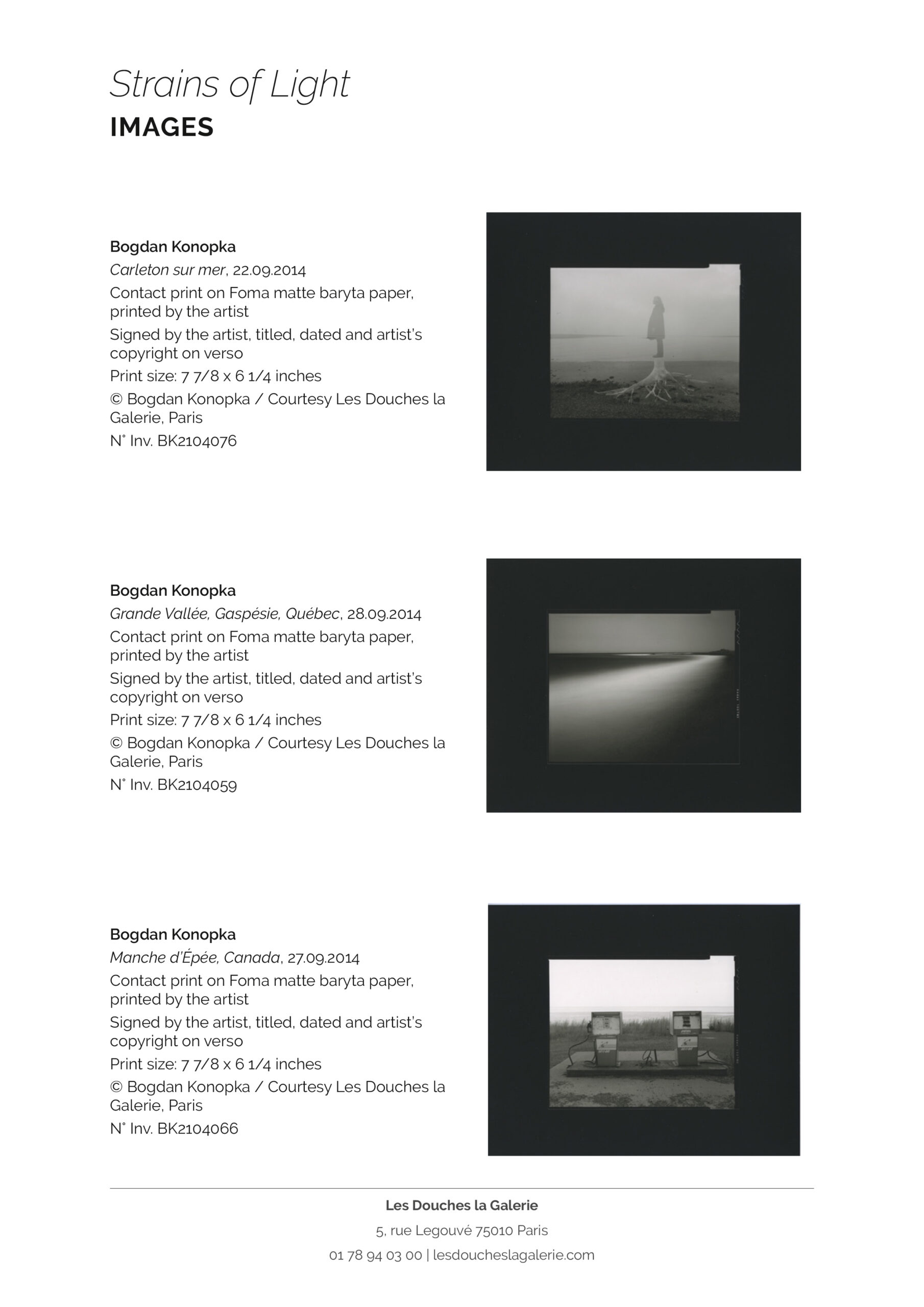